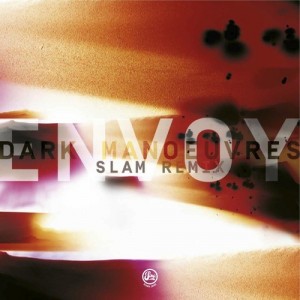 Slam get to grips with Envoy’s 1996 classic, ‘Dark Manoeuvres’ in this latest EP release. Soma have been bringing some of Envoy’s classic releases up to date with Slam following Ricardo Villalobos in reinterpreting the earlier work, all of which leads to May’s release on Soma of new material by Envoy.

Dark Manoeuvres is a track which lives up to its name, the original expressing pumping, dark and crunchy sounds interspersed with string arrangements and overdubs which move the track in various different directions. The 1996 original is a great example of some production techniques of the time and is of interest in identifying the direction of the Techno sound in that era, as well as being eminently listenable.

Slam were very much involved in the progression of Techno at the same time as Envoy was creating tracks such as Dark Manoeuvres and as such they have a real handle on how things have evolved, enabling them to bring a classic release such as this bang up to date.

The distinctive hook, attention-grabbing melody and strings which are distinctive elements of the original are all incorporated in a full and fresh dynamic which sees some of these elements regrouped in individual sections such as the strings or moulded with deeper, darker resonance into a new expression. The hi-hat and kick drum interplay still drives the rhythm keeping that element as a prominent part of the track, setting a strong foundation that was integral to the original. Some of the more idiosyncratic elements of the original such as the aquatic overdubs, highlighting production, are reconstructed with use of modern technology to provide waves of highly imposing, building sound at crucial points in the track.

This is a great remix by Slam elevating the original track and elements within it to provide a new and totally engaging release which still expresses all the great qualities of the original. This will be a firm favourite with old and new fans of both Envoy and Slam.