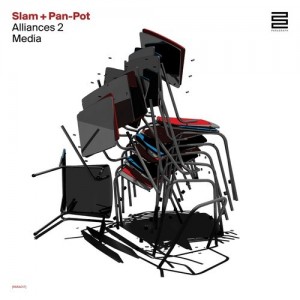 Mastered at Glowcast by Conor Dalton.

Check it out here.

After the success of the Slam + Gary Beck (Alliances 1) release, Slam welcome friends and peers Pan-Pot to the next phase of their ‘Alliances’ series. Slam & Pan-Pot have shared the stage at many an occasion whether it be at Slam’s Pressure or Return To Mono nights at The Arches & Sub Club respectively, or at the Mobilee Rooftop or Poolside parties, Off-Sonar. Pan-Pot have also remixed Slam’s ‘Room 2’ & ‘Lifetimes’ tracks while Slam have reworked Pan-Pot’s ‘Face To Face’ & ‘Confronted’ tracks. Their sounds are well matched, as are their personalities. ‘Media’ brings the drive, swing and melody that both pairs of producers do so well. Twisting and turning through delayed FX and doubling drums, ‘Media’ swells until it hits an epic bass sequence at the tracks half-way mark before dropping back to a stripped groove. When the two acts combine they are most certainly a formidable force. ‘Media’ is the perfect example of this.